Webster Arts may be confined in a tight space, but they have an extensive outreach. 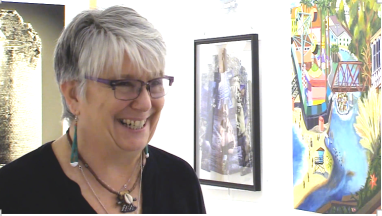 “All Webster Arts wanted to do 15 years ago was have an art fair.” Vogel explained.

Two years after that conception, they had their first fair.   Webster Arts has been growing ever since.  Webster Arts teamed up with the International Institute of St. Louis last year to help acclamate refugees.

The non-profit group was ranked 77th nationwide in fine arts fairs by Sunshine Artists Magazine.  The fair has over 100-artists from all over the United States.  The fair, has tent after tent of painters, sculptures, metal crafters, woodworkers and various other forms of art.

People who attend the fair can eat  food from local restaurants and listen to live music. Over twenty thousand visitors browse the rows of tents  and talk with the artists.

Webster Arts was originally named Art&Air Fair at the Emmanual Episcopal Church in 2000.  The idea was to bring the Webster community closer together. EEC fair had 90-artist attend.  The Fair then moved to Eden Seminary.  Where they now hold several exhibits and outreach programs.

Inside Eden Seminary’s  basement,  the committee came together once again,  making  a gallery where artists exhibit year round.

The committee painted the walls themselves and raised money for lighting and hanging fixtures.

At the corner of Lockwood and Bombart, is  the huge Eden Seminary grassy knoll  that holds the annual  June arts fair.  Behind the field sits the Webster Arts Center in Schultz Hall.

More than fifty refugees are from Syria, Vietnam, Bhutan, Afghanistan and the Democratic Republic of Congo participated.

Art refugee sessions last fall were held at the International Institute.   People who are interested in volunteering are asked to  Call 314.918.2671.

Grants from the Trio Foundation of St. Louis made these art sessions posible.

“The refugees had been removed from any art craft they had.  Once they came in and saw what we had available to them, they immediately started creating.”  Vogel said.

Vogel  said she feels good about all the possibilities art brings to communities.  Earlier this month they held a discussion panel on community and how to strengthen relationships within a community.

Vogel, an artist herself,  got misty-eyed when she talked about the Immigration Art Outreach.

“I was watching people who didn’t speak the same language talk to eachother. Art is tremendous.  It connects people to their culture and eachother.”